There’s one thing when you’re getting married that can be scary even if you feel 100% positive about anything and everything to do with your fiance. In the end you’re not just marrying him, you’re marrying his family. Television depicts parents-in-law as only existing to run your household against your wishes and never believe you to be good enough for their perfect little boy or girl. There’s even that JLo movie entitled Monster-in-Law.

Well I’m here to say that my mother-in-law is a sweetheart.

She loves puppies, she makes ridiculously good lasagna and she taught me how to make pie crust. She’s also one of those ladies that you just want to hug for no reason because she seems so happy all the time that you hope some of the happy will rub off on you.

And in case you weren’t sure she was a sweetheart, she recently sent me this in the mail: 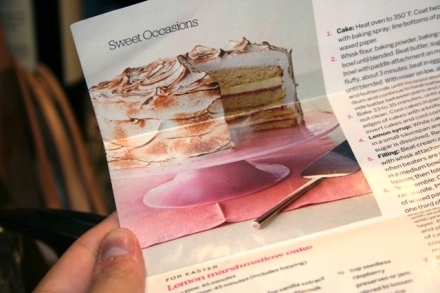 How could you not adore a woman who sends recipes that look like this in mail?

So I added it to the pile of recipes I keep meaning (and what a pile!) to make and last weekend finally decided to attack it.

My conclusion? I need to slather more things in homemade marshmallow lit on fire. I also need to practice making thicker lemon curd. That’s why it looks like the filling is just raspberry jam… the lemon filling came out too thin and just sort of… oozed out the sides. Whoops.

Lemon Curd – I simply didn’t cook it long enough. There’s a tip included in the Curd recipe that once you can drag your finger across the back of a wooden spoon and it’ll leave a clear line in the curd, you’re done cooking. I declare this tip false, at least for me. The curd wasn’t nearly thick enough after a sit in the fridge, and wasn’t a stable enough filling for the cake, even after it was mixed with the stiffly whipped cream. I will say, it was still delicious!

Marshmallow – Mmm… marshmallow. Marshmallow Fluff is probably more accurate for this, which is a good thing considering I used it to frost a cake! The thing that excited me the most about it was it was egg white based instead of gelatin, which I hadn’t even heard of before this recipe. It was super easy to make especially considering all the fiddly parts (egg whites, double boiler, and especially the combo of the two as egg + heat – any curdling whatsoever = scary) and I now want to find reasons to make more and slather it on various baked goods. Perhaps some sort of s’mores bar is in order…

Kitchen Torch – I bought one specially for this cake and was met with a face full of fail by not realizing that my torch didn’t come with any fuel until I was ready to join fire to cake. At 10pm when no one was open except the QFC. Yar. HOWEVER! Trevor came to the rescue with the brilliant idea of using a bbq lighter. The flame wasn’t as big so I kind of ended up with black burnt areas directly next to pristine white areas, but it got the general idea accomplished. Hooray!

This just means I need to buy some butane and go full hog sometime soon. Did someone say Creme Brulee? Oh baby.