A Boston Cream Pie is a wonderful, cream filled, chocolate covered cake, masquerading under the moniker “pie”. I was determined to avoid them as a child, due to a strong dislike for the custard found in the center of a Tim Hortons Boston Cream Donut. I just thought it tasted “weird”, which I’m pretty sure was 7-year-old-me code for “not sugary enough”. I think I had expected it to taste like frosting.

It didn’t help that the “weird” custard had a tendency to ooze everywhere when you bit into the donut.

Considering my new-found affinity for Boston Cream Pie, (Courtesy of Trevor loving them and demanding I make one) if adult me tried a Tim Hortons Boston Cream for the first time today, there’s a good chance that I would actually like it. But strong nostalgic memories associated with certain foods, positive or negative, have a tendency to die hard.

I suddenly hits me that not all of you may be familiar with the Tim Hortons establishment. 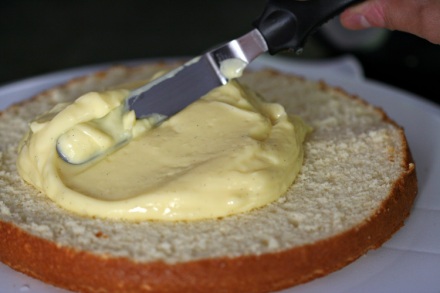 It’s like Dunkin Donuts except it’s EVERYWHERE the way Starbucks is, and it also somehow became a symbol of Canada. Most Canadians will fight you to the death that the coffee there is the best stuff you can get even though it actually tastes like bitter coffee beans.

Don’t hate me Canada for saying so. Large brown paper cups of Timmys helped me graduate from university, with a sugar topped chocolate chip muffin almost always next to it. Is it a wonderful stand-by? Of course. And it’s not that I hate it, because I do like it. But it’s not the best.

Trevor would actually probably fight other Canadians to death that their coffee is the most vile thing out there.

He hates the place because he worked there for 3 years. ANY extended fast food sort of job will having you hating the product. The smell of a Timmys still makes him shudder, even after living outside of Canada for almost 4 years. 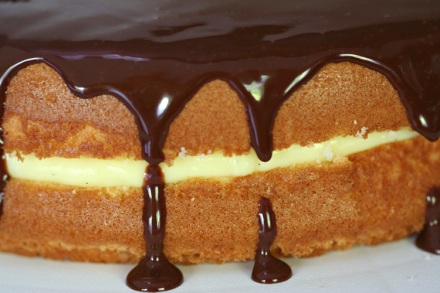 But it’s okay, I can cheer him up now with Boston Cream Pies, as they ended up being a lot easier to make than I originally expected, and a lot tastier than my childhood mind would have me believe.