I spend a lot of time baking.

I love to play all kinds (well… I guess I’m not really into sports games) but there’s one game in particular I keep going back to.

I’m not going to bore you all with the details of the game, but what you do need to know about is Lulu.

This is Bittersweet Lulu. She is a magical little purple yordle who likes to get up to mischief. But most importantly… sometimes she turns her enemies into hopping, helpless little cupcakes.

So if I was going to make a consumable version of her magical cupcakes, there were a few things I wanted to make sure I kept in mind. Lulu has a bunch of catchphrases, but one of my favourites is “Yup, that tasted purple!”.

So these cupcakes had to taste purple. 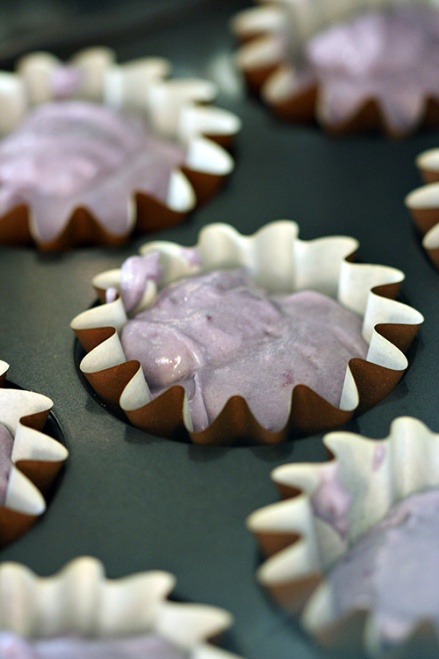 Grape is the only flavour that I think truly tastes purple. The only way I knew how to integrate grape into a dessert was through grape jello, so I took inspiration from my strawberry cake and made a grape cupcake.

The other thing I considered (because I’m a little weird) was that Lulu’s cupcakes weren’t actually cakes really. They were people.

And people are a little red and gooey on the inside.

Yeah, I’m totally weird. But it amused me, so I did it! But what is red and goes with grape flavour? Originally I was going to go with a raspberry preserve but the idea of grape/raspberry wasn’t quite sitting right with me.

But that’s okay, because I found a recipe for pomegranate curd. 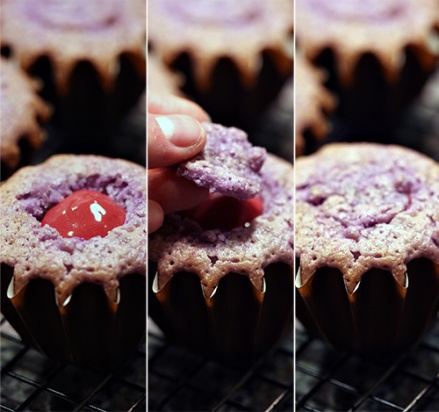 You should know, pomegranate curd actually comes out a weird brown colour due to all the egg yolks. So make sure you have some red food dye nearby!

And FYI, the pomegranate flavour worked lovely with the grape, with the tanginess playing really well in the cupcake.

And did grape jello do the trick to make things taste purple?

Add a little fondant, sprinkles and a spherical, red, pretzel m&m, and the cupcake takes on a whole personality.

A personality that makes it that much more hilarious when you take a hefty bite out of the cupcake, right into that red goo..

Call me twisted, but I couldn’t stop giggling after the first bite of cupcake.

But it’s okay, Lulu would have giggled too.